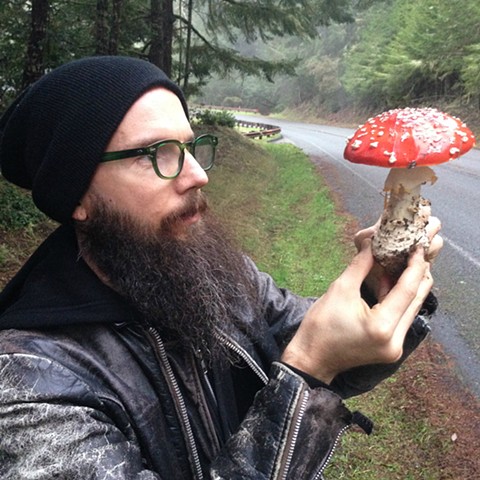 Michael Campbell grew up in the Midwest in the 1970's amid the handicraft movement with a home full of macramé, decoupage, and papier-mâché. 1,600 miles away from Haight-Ashbury, he made God's eyes in Cub Scouts and glued macaroni onto wooden crosses in Sunday School. From an early age, handcrafted objects and the divine were connected.

Campbell's art explores mushrooms in both their natural role as 'decomposers' of dead, organic matter and as symbols of fairytales and altered states of consciousness. The bold red and white spotted caps of the immediately identifiable amanita muscaria are the iconic symbols of both vintage Christmas gnomes and of Siberian Shamans engaged in vision quests. Campbell references the depiction of these mushrooms here as the forbidden fruit in the Christian fresco found in the Plaincouroualt Abbey.

Campbell's sculpture speaks in a visual language unique to the 1970's through bright colors and painted plaster casts reminiscent of chalkware banks of that era. They suggest hand painted, mass-produced tchotchkes of divine sacraments, mushroom saints, and forest spirits.